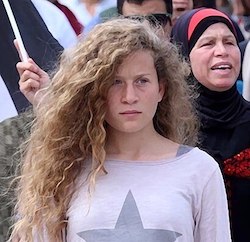 Ahed Tamimi is a Palestinian who has become a globally recognised icon for resistance to the Israeli occupation of Palestine. In 2017, she con­fronted Israeli soldiers who entered her yard in the West Bank village of Nabi Saleh, and then proceeded to slap and kick them. Her mother was recording the incident and later the video went viral. A few days later, at night, the Israeli army’s own camera doc­umented soldiers entering her house, handcuffing and arresting Tamimi. She was then subject to inter­rogation, a fate common to most Palestinian youth living under occupation, detained for three months and sentenced to eight months in jail. Her mother was also imprisoned but never charged. Ahed was re­leased after serving eight months as a political prison­er and received worldwide support for highlighting the oppressive life faced by Palestinians. She has recently published a book entitled They Called Me a Lioness.