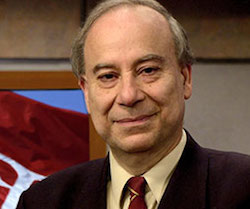 Professor Akbar Ahmed is the Ibn Khaldun Chair of Islamic Studies at the American University in Wash­ington, DC and the former Paki­stani High Commissioner to the UK and Ireland. In addition to his academic and public sector careers, Ahmed has produced a number of noteworthy films and authored more than a dozen award-winning books. He produced the Jinnah Quartet and fea­ture film, Jinnah (1998). He was awarded the 2017 Sir Syed Day Lifetime Achievement Award for ex­cellence in Poetry, Literature, Arts and the Sciences and declared the 2017 Scholar/Teacher of the Year of the American University School of International Service. Ahmed was awarded the Diplomatic Leader­ship Award in 2019 from PakPac USA for outstand­ing academic endeavour. He has produced two films: Journey into America and Journey into Europe, which are both accompanied with books with the same titles.