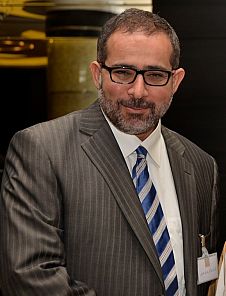 Dr Aref Ali Nayed was the first Libyan Ambassador to the UAE for Libya’s National Transitional Council and led the Libya Stabilisation Team in 2011. He is a leading scholar in the field of Islamic Theology, Philosophy, and Muslim-Christian Relations, the founder and director of Kalam Research & Media (KRM) and the Libya Institute for Advanced Studies (LIAS).

Scholar: Nayed is currently a Visiting Senior Research Affiliate of Religious Studies at the University of Virginia. He was also a former professor at the Pontifical Institute for Arabic and Islamic Studies (Rome), and a former professor at the International Institute for Islamic Thought and Civilization (ISTAC, Malaysia). Prior to the Libyan revolution he lectured on Islamic Theology, Logic, and Spirituality at the restored Uthman Pasha Madrasa in Tripoli, Libya, and supervised graduate students at the Islamic Call College in the country.

Political Leader: Nayed’s other strengths have not gone unnoticed, and when he first submitted his resignation from the post of Ambassador to the UAE, it was rejected, and he was asked to take the position again. He is viewed in many circles as a man of integrity, wisdom, strength and diplomatic foresight—virtues that are needed at the highest level to put Libya back on track. In 2017, Nayed launched a new movement for change in Libya named Ihya Libya (“Reviving Libya”) which centred around a comprehensive vision for Libya, and managed to galvanise various social fabric and civil society groups into a political consortium. Ihya Libya aims to create a stable, prosperous and democratic country. Dr Nayed is one of the leading figures in the Libyan diplomatic, social fabric, and political landscapes and is a leading Presidential/Prime Ministerial candidate in the coming elections in Libya.