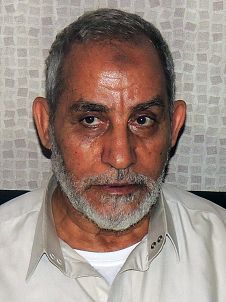 Dr Mohammed Badie succeeded Mohammad Mahdi Akef as the 8th Supreme Guide of the Muslim Brotherhood in January 2010. Following the military coup against Morsi’s leadership, he was one of many Muslim Brotherhood leaders arrested. Badie–whose son was shot dead during one of the counter-protests against the coup–was sentenced to death in April 2015 along with 13 other senior Muslim Brotherhood members. In 2017, the Cassation Court accepted the appeal of Badie and 49 other defendants against their death sentences. He is currently serving multiple life sentences in prison.