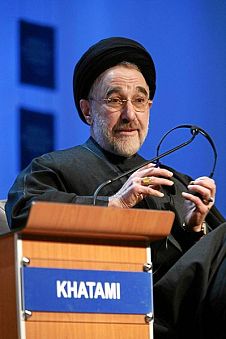 Khatami is a reformist politician who served as president of Iran from 1997 to 2005. Although he was ineffective in bringing about many of the populist changes in his mandate, he remains a figurehead of the reformist movement. Khatami was elected to the first Majles al Shura and is known internationally for his proposal of the UN Dialogue Among Civilizations initiative, a movement he hopes will counter the prevailing sentiment that there was a “clash of civilizations”. He continues his work in inter-civilizational dialogue and internal reform through two NGOs that he founded and heads. His movements are limited by security and the Iranian media are currently banned from mentioning his name or publishing pictures of him.