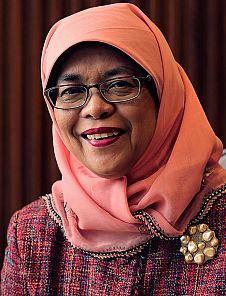 Halimah Yacob became Singapore’s eighth, and first female, President in September 2017 when she was elected unopposed.

Election: A former speaker of Parliament she gave up her parliamentary seat and position with the ruling People’s Action Party to run for President. The government’s criteria for the current President, including that the President must be an ethnic Malay, meant that Yacob was unopposed and became President unelected, a process which has drawn some criticism. She is the first ethnic Malay President.

Background: Halimah Yacob comes from humble beginnings, being raised by her Malay mother after her Indian father passed away when she was eight years old. Her mother struggled to raise her five children and Halimah almost neglected her school studies because of the need to help out at home. She was successful at school and continued to obtain her law degree and master’s in law from the National University of Singapore. She then went on to work at the National Trades Union Congress before becoming Director of the Singapore Institute of Labour Studies.

Political career: She entered politics in 2001 and a decade later was appointed Minister of Community Development, Youth and Sports and later on Minister of Social and Family Development. She was elected Speaker of Parliament in 2013, becoming the first woman to hold the post. As President she has promoted initiatives for supporting a cohesive society, strengthening interfaith and recognising all workers who contribute to Singapore’s growth. She has a strong international profile, regularly meeting world leaders.