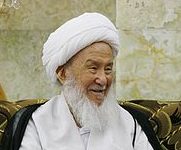 Grand Ayatollah Fayadh, originally from Afghanistan, is one of the four maraji’ of the Hawza Seminary in Najaf, Iraq—one of the two most important seats of learning in Twelver Shi’ism. Fayadh is known for his quietist approach to politics and is well-respected especially amongst the Shi‘a population of South Asia.