← Recep Tayyip Erdogan
Muhammad Taqi Usmani →
His Majesty King Abdullah II Ibn Al-Hussein
Custodian of the Muslim and Christian holy sites in Jerusalem, direct descendant of the Prophet Muhammad (peace be upon him) 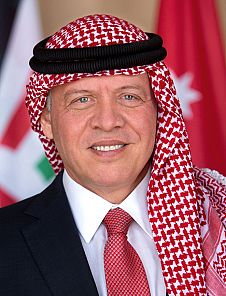 5
His Majesty King Abdullah II Ibn Al-Hussein
Custodian of the Muslim and Christian holy sites in Jerusalem, direct descendant of the Prophet Muhammad (peace be upon him)

HM King Abdullah II is the constitutional monarch of the Hashemite Kingdom of Jordan and the Supreme Commander of the Jordan Arab Army. He is also the Custodian of the Muslim and Christian Holy Sites in Jerusalem.

HM King Abdullah II is the constitutional mon­arch of the Hashemite Kingdom of Jordan and the Supreme Commander of the Jordanian Armed Forces, The Arab Army. He is also the Custodian of the Muslim and Christian Holy Sites in Jerusalem.

Location: King Abdullah is not the leader of a rich or populous country, nor is he a religious scholar, but what makes his role vital is being the linchpin to the central cause of the Islamic world: the issue of Pales­tine and Jerusalem, and his being the Custodian of the Muslim and Christian Holy Sites there. There are over 12 million Palestinians in the world, 3 million in Jordan itself, around another 5 million in the oc­cupied territories and Israel, and 2 million in Gaza. As Palestine is not recognised as a state by the entire international community, the responsibility for an equitable peace falls largely on its next-door neigh­bour Jordan, and on King Abdullah II in particu­lar, especially as his family have been the hereditary Custodians of the Holy Sites from before the creation of the state of Jordan itself. Moreover, in the face of increased pressure to dissolve the very notion of Pal­estinian identity, dissolve UNRWA and illegally and unilaterally grant Jerusalem to Israel, King Abdullah has been the only influential voice actively—but re­sponsibly—resisting this catastrophe for the Islamic world. Moreover, Jerusalem is one of Islam’s three holiest sites and is as holy to Muslims as it is to Jews and Christians, and its loss would rep­resent a grievance based not only on justice but on faith to all the world’s 1.9 billion Muslims, a situa­tion with explosive potential consequences, to say the least.

Lineage: King Abdullah II is a 41st-generation direct descendant of the Prophet Muhammad  through the line of the Prophet’s grandson Al-Hasan. The Hashemite Dynasty is the second-oldest ruling dy­nasty in the world, after that of Japan. As the current bearer of the Hashemite legacy, HM King Abdullah II has a unique prestige in the Islamic world, in addi­tion to his being the Custodian of the Muslim and Christian Holy Sites in Jerusalem (and of course Jor­dan itself).

Longevity: King Abdallah II is now the longest-serv­ing Arab ruler. His father King Hussein himself ruled for 47 years and was the long­est-serving Arab leader when he died in 1999.

Support for Jerusalem (Al-Quds): HM King Ab­dullah II is the custodian of Al-Haram Al-Sharif in Jerusalem, the sacred compound which contains Al-Aqsa Mosque and the Dome of the Rock. Indeed, the Hashemite Custodianship of the Muslim and Christian Holy Sites in Jerusalem is essential in safeguarding the pre-1967 Status Quo at the Al-Aqsa Mosque / Al-Haram Al-Sharif. The Status Quo is a critical insurance against attempts at temporal and spatial division of Al-Haram Al-Sharif and Judaizing its surroundings. HM is also the custodian of Christian Holy Sites in Jerusa­lem. He has firmly supported the upkeep and reno­vation of these sites. In 2016 King Abdullah issued a Royal Benefaction to provide for the restoration of Jesus’ Tomb in the Church of the Holy Sepulchre in Jerusalem, at his own personal expense. And in 2018 he helped fund the restoration of the entire Church of the Holy Sepulchre in Jerusalem from his own funds, in particular the US$1.4 million received from the 2018 Templeton Prize.

Reformer: HM King Abdullah’s progressive vision for Jordan is based on political openness, econom­ic and social development, and the Islamic values of goodwill and tolerance. Under his reign Jordan has witnessed sweeping constitutional changes (one third of the Constitution was amended), and polit­ical and social reforms aimed at increasing govern­mental transparency and accountability.

Islamic Outreach: In response to growing Islamo­phobia in the West in the wake of 9/11 and rising sectarian strife, King Abdullah II launched the Am­man Message initiative in 2004 (see “www. ammanmessage. com” on page 59), which was unanimously adopted by the Islamic World’s political and temporal leader­ships. King Abdullah II is also credited with one of the world’s most authoritative websites on the Holy Qur’an and Tafsir; the Roy­al Aal Al-Bayt Institute for Islamic Thought’s Altafsir.com (see “Altafsir. com” on page 173). He also founded the World Islamic Sciences and Education Universi­ty in Jordan (see www.wise.edu.jo) in 2008. In 2012, King Abdullah II set up integral professorial chairs for the study of the work of Imam Al-Ghazali at the Al-Aqsa Mosque and Imam Al-Razi at the King Hussein Mosque. In 2019 King Abdullah established the Integral Chair for the Study of Imam Al Suyuti’s Work at Al Husseini Grand Mosque. And in 2022 His Majesty established the Integral Chair for the Study of Imam Al-Nawawi’s Work at Al-Salt Grand Mosque and at the World Islamic Sciences and Education University (WISE). In 2014 King Abdullah established a fellowship for the study of love in religion at Regent’s Park College, Oxford University.

Majalla Law: 80% of Jordan’s laws are based on the Ottoman Majalla and hence on traditional Hanafi Shari’a. Jordan has a Chief Mufti, official Muftis in every province, Army and Police Grand Muftis and Shari’a Courts for all personal status issues for Mus­lims. Yet it has Orthodox-Priest-run courts for its na­tive Christian population in Christian personal status issues, and Jordan guarantees Christian seats in the Parliament and de facto at every level of government. It has civil law for all citizens and additional tribal laws and customs for tribesmen and tribeswomen.

Interfaith Outreach: HM King Abdullah II is also lauded as an interfaith leader for his support of the 2007 A Common Word initiative (see “A Common Word” on page 127). He was also the initiator and driving force behind the UN World Interfaith Har­mony Week Resolution in 2010 (see “UN World Interfaith Harmony Week” on page 162). In 2014 HM King Abdullah hosted HH Pope Francis in Jordan (having previously hosted both HH Pope Benedict XVI and HH Pope John Paul II). In 2015 the Baptism Site of Jesus Christ on Jordan’s River Bank was unanimously voted a UNESCO World Heritage Site. Thus, at the same time that da’ish was destroying Syria and Iraq’s historical and archaeolog­ical treasures, King Abdullah was preserving not just Muslim Holy Sites, but Christian Holy Sites and uni­versal historical and religious treasures as well.

Safe Haven: Jordan has around 2 million registered and unregistered refugees from Syria and Iraq and other regional conflicts (such as Libya and Yemen), in addition to around 2 million refugees from the Palestine conflict. Despite its paucity of resources, Jordan has welcomed and accommodated a stagger­ing number of refugees and is seen by many as the most stable country in a turbulent region. It has the highest percentage of refugees of any country in the world.

Templeton Prize Winner 2018: HM King Abdul­lah was awarded the 2018 Templeton Prize, the most prestigious prize in the world in religious affairs. He is the second Muslim, and the first statesman, ever to be granted this honour. The prize recognises those who have “made an exceptional contribution to affirming life’s spiritual dimension”. The judges mentioned in particular King Abdullah’s work in promoting intra-Islam­ic religious harmony, reclaiming the narrative from extremists, as well as between Islam and other faiths.

Reform: In 2021, HM King Abdullah II pushed for political modernisation and announced the introduction of a new committee of 92 members tasked to modernise the political system and to propose new laws for local governments. The committee proposed draft laws for political parties and elections, as well as 22 amendments to the Jordan Constitution regarding parliamentary work and empowering women and youth.

“Our country is a bridge for regional partnerships and cooperation, international crisis response, and humanitarian action.”