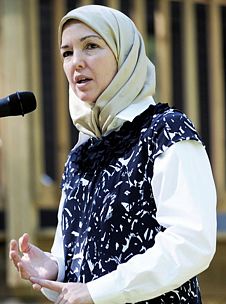 Dr Ingrid Mattson is the London and Windsor Community Chair in Islamic Studies at Huron Uni­versity College at Western Uni­versity in Canada. Previously she had worked for 14 years as Professor at the Hartford Seminary in Hartford, and served as Director of the Macdonald Center for the Study of Islam and Christian-Muslim Relations. In 2001 she was elected Vice President of ISNA and in 2006 she was elected President. She is the author of the highly acclaimed The Story of the Qur’an. In late 2018, Dr Mattson founded a major project to uphold the sacred inviolability (hurma) of those who enter Muslim spaces from exploitation and abuse by those holding religious power and authority. The Hurma Project is conducting research, education, training and protocols for professional oversight for imams, chaplains, mosque boards and others.