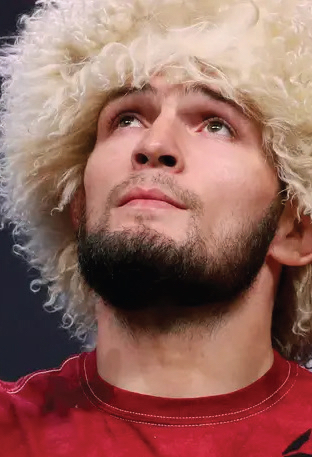 Khabib Nurmagomedov is a former mixed martial artist. As well as being the youngest Russian wrestler in his­tory to compete in the UFC, he was also the first Russian and Muslim to win a UFC title. He was the Lightweight UFC champion holding the longest undefeated streak in MMA history with 29 wins before retiring in March 2021. He won a high-profile fight with Conor McGregor but was involved in a brawl immediately following the fight which led to both fighters being banned for several months. On his return to the ring in September 2019, he beat the interim champion. He is ethnically from the Russian republic of Dagestan and has chosen the nickname “the eagle” to pay homage to this region. This has won him great support amongst many Muslim youth not only in Dagestan but also in Chechnya and other ex-soviet Muslim majority countries. His appeal is not limited to these as he has managed to transcend ethnic complexities and become one of Russia’s most popular sportsmen.