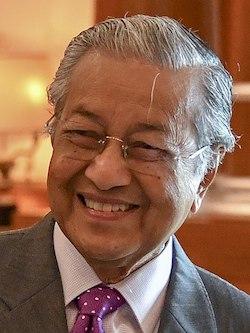 Mahathir is a dominant political figure. In his first tenure as Prime Minister (1981-2003) he won five consecutive general elections. He was the key figure behind the transition of Malaysia’s economy from being agricultural based into a newly industrialised market economy. He is noted for his support for liberal Muslim values and has established Islamic institutions such as the International Islamic University of Malaysia. Mahathir has, however, been criticised for his record on civil liberties and for the trials and tribulations that his former Deputy Prime Minister, Anwar Ibrahim, endured after being sacked by Mahathir in 1998. After retiring for many years, Mahathir registered a new political party in 2017 and joined the coalition Pakatan Harapan (Pact of Hope) which went on to win the 2018 elections with Ma­hathir becoming, at 94 years old, the world’s oldest sitting head of government. He was expected to serve in this role for a year and then allow Anwar Ibrahim to succeed him, but another falling out between the two prevented this and broke the coalition.