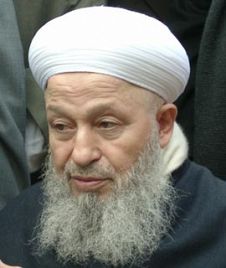 Sheikh Mahmud Ustaosmanoglu, also known as Sheikh Mahmud Effendi, was one of the most popular Islamic teachers in Türkiye today. He emphasised the Sunnah and was well-known for having revived many of the Sunnah practices. Sheikh Effendi became a hafiz (one who has memorised the Qur’an) at the tender age of 6. He then started studying Arabic and Persian at first, and then went on to study the Islamic Sciences. Sheikh Effendi was appointed imam of the Ismail Agha mosque in Istanbul in 1954, where he remained until he retired in 1996. Preaching: He began delivering spiritual and ethical guidance from 1960 following the death of his Shaikh Ali Haydar Effendi. He devoted three weeks per-year to teach people across Türkiye and made several missionary and educational tours in several countries, including Uzbekistan, India, Germany and the United States. He has a Qur’an tafsir (commentary) named Ruhu’l Furkan in Turkish. He had millions of followers and established various religious, social and charity organisations such as the Marifet Association, the Federation of Marifet Associations and Ahle Sunnah wal Jamaah Confederation.