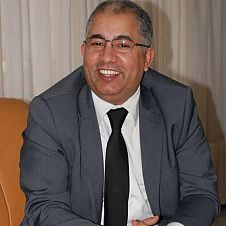 Dr Mohammed Bechari, born in Morocco, is a leading prolific and dynamic public figure in the landscape of European Islam.

Dr Mohammed Bechari, born in Morocco, is a leading prolific and dynamic public figure in the landscape of European Islam. He heads a variety of organisations that seek to better represent French and European Muslims to wider society as well as working to empower their own communities.
Head of Organisations: He is the Secretary General of the UAE-based World Muslim Communities Council, president of the French National Federation of Muslims, one of the leading entities organising Islam in France. He is also the secretary general of the Islamic European Conference, a Europe-wide umbrella organisation that seeks to be a single entity representing European Muslims at the European level. Bechari is the founder of the Avicenna Institute in Lille and member of King Abdullah bin Abdulaziz International Center for Interreligious and Intercultural Dialogue (KAICIID) in Vienna.

Scholar and Awards: Bechari has written many books and taken up visiting professor posts at several international universities. He was awarded the King Abdullah II Award for Excellence of the First Class as well as The Medal of Sciences and Arts of the First Class from the Arab Republic of Egypt.
Outspoken: Bechari has been outspoken against those who would incite hatred and violence. He has included not only DA’ISH in this category but also any Imams who preach hatred in French mosques. He has been keen to win Islam back from the distorted image portrayed by terrorists. He has voiced his beliefs against DA’ISH and Al-Qaeda who promote terrorism and have distorted the image of Islam worldwide. During an interview on Dubai TV in 2016, he went as far as saying that Imams who incite and “preach hatred in the mosques” should be deported.