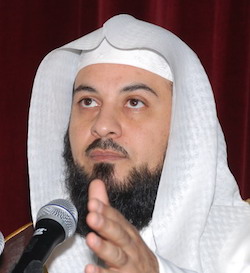 Dr Al-Arifi is a well-known schol­ar and lecturer from Saudi Arabia. He is a founding and honorary member of various da’wa organ­isations, as well as being a member of their adviso­ry committees. He is also a Professor at King Saud University of Riyadh. He takes a special interest in hadith literature and has received licenses for the chains of transmission for various hadith texts from a number of scholars. He has over 42 million follow­ers on social media.