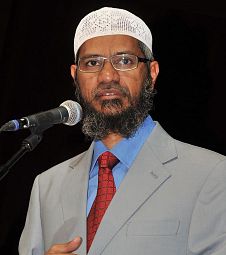 Zakir Abdul Karim Naik is a pop­ular preacher and comparative reli­gion specialist in the mould of the legendary Ahmed Deedat. Naik challenges leaders of other faiths to public debates that are broadcast around the world on Peace TV—a satellite channel that he helped to found. In 2015, he was awarded the King Faisal International Prize for Services to Islam. Since 2016 he has been resident in Malaysia, but is being investigated by the National Investigation Agency (NIA) on incitement to terror and money-laundering charges. India has requested extradition so he might stand trial on those charges. In 2021, Naik launched Al Hidaayah, a new platform with educational content from renowned Islamic speakers from all over the world. His Youtube chan­nel has close to 228 million views and he has over 22 million Facebook followers.