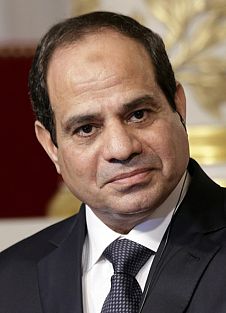 Former Field Marshal Abdel Fattah Saeed El-Sisi removed Egypt’s first democratically elected president (Mohamed Morsi) from power in 2013. Outbreaks of violence ensued across Egypt that included the death of many hundreds of protesters at the hands of pro-military police at Raba’a Al-Adawiya Square in Cairo. Sisi then ran for the office himself and was sworn into office as President of Egypt on 8 June 2014, having earlier that year resigned from his post as the Commander in Chief of the Egyptian Armed Forces. Sisi has inherited a politically and economically battered Egypt, with a weak infrastructure, plummeting currency, and violent insurgency and unrest in Sinai. Under Sisi, Egypt has enjoyed excellent relations with members of the Arab League, most notably with Saudi Arabia and the UAE. Sisi supported the blockade on Qatar as well as the GCC-led military intervention in Yemen. He has publically supported the Asad regime in Syria and has called on the Palestinian people to make peace with Israel in his UNGA speech in September 2017, promising the Israeli people “Egypt’s unwavering support.”