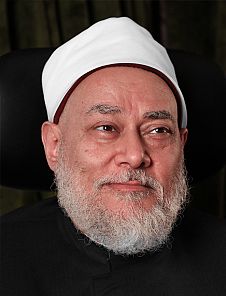 Sheikh Ali Gomaa is the former Grand Mufti of the Arab Republic of Egypt. He is one of the foremost Islamic scholars in the world. Despite retiring from the post of Grand Mufti of Egypt in 2013, Gomaa has remained active on many fronts and his counsel is more in demand than ever before.

Sheikh Ali Gomaa is the former Grand Mufti of the Arab Republic of Egypt. He is one of the foremost Islamic scholars in the world. Despite retiring from the post of Grand Mufti of Egypt in 2013, Gomaa has remained active on many fronts and his counsel is more in demand than ever before.

Egypt’s Weight in Islamic Scholarship: Gomaa’s scholarly influence is derived from his position at the centre of many of the most significant institutions of Islamic law in the world. Before becoming Grand Mufti, Gomaa was a professor of jurisprudence at Al-Azhar University—the second oldest university in the world, founded in 975 CE. Gomaa also served as a member of the Fatwa Council. He is currently a member of the International Islamic Fiqh Academy, the highest institute of Islamic law in the Organiza­tion of the Islamic Conference—an intergovernmen­tal organisation for Muslim-majority countries. Go­maa has authored over 50 books, as well as hundreds of articles. However, in July 2021 the secretariat of the International Union of Muslim Scholars dis­missed him, along with Sheikh Abdullah Bin Bayyah and Farouk Hamadeh, from the organisation, osten­sibly for controversial fiqh (jurisprudence) opinions.

Visit to the Holy Al-Aqsa Mosque Controversy: On 18 April 2012, Sheikh Ali Gomaa, with HRH Prince Ghazi of Jordan, broke what had been a 45-year taboo in some parts of the Islamic World and visited Al-Aqsa Mosque in order to pray there and support the beleaguered Muslim community in Jerusalem. The visit was viewed as controversial in Egypt but set off a change of public opinion in the Islamic World that continues to this day. The Grand Mufti also visited the Church of the Holy Sepulcher, which was much appreciated by the Christian com­munity of Jerusalem.

Personal Popularity: Gomaa was exceedingly popular as a mufti and remains ever-popular (he has close to 6 million social media followers) since his retirement, although some of his political statements and pro-military government stance after the Egyptian Revolution have tempered this support somewhat. Apart from appearing on popular broadcasts and satellite television programmes, he also revived the practice of informal “knowledge circles” at the Al-Azhar Mosque. At his very well-attended Q&A sessions after his Friday sermons, Gomaa makes a point of taking on anyone who tries to simplify or distort Islamic teachings without knowledge of its traditions. This has made him extremely popular with those who vehemently oppose political Islam as well as also making him a target for some extremists.

Popularised and Simplified Fatwas: Gomaa has immense legal influence through his advocacy of Is­lamic religious edicts (fatwas). When he was Grand Mufti of Egypt, he modernised the process of issuing fatwas in the country. He did this by overhauling the Dar Al-Ifta organisation into a dynamic institution with worldwide reach, based on a fatwa council and a system of checks and balances.

“Terrorism cannot be born of religion. Terrorism is the product of corrupt minds, hardened hearts, and arrogant egos, and corruption, destruction, and arrogance are unknown to the heart attached to the divine.”