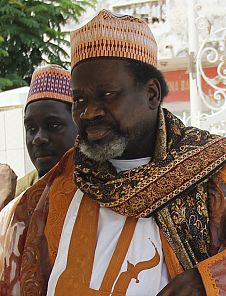 Sheikh Ahmad Tijani bin Ali Cisse is the spiritual leader of the Tijaniyya Sufi order. The Tijaniyya is the largest Sufi order in Western Africa, and its leader commands a following of millions, who see him as their guide to true Islam.

Sheikh Ahmad Tijani bin Ali Cisse is the spiritual leader of the Tijaniyya Sufi order. The Tijaniyya is the largest Sufi order in Western Africa, and its leader commands a following of millions, who see him as their guide to true Islam.

Leader of Tijani Muslims: Cisse became leader of the Tijaniyya following the death of his elder brother Sheikh Hassan Cisse in 2008. He is the Imam of the Grand Mosque in Medina Baye, Senegal, which is one of Western Africa’s key positions of Islamic lead­ership. Tijani Muslims are located throughout West­ern Africa and further afield. As an order, Tijanis give allegiance to their sheikh giving him significant influ­ence as a leader.

Education and Activities: Sheikh Tijani Cisse (b. 1955) studied Qur’an, Arabic and classical texts with both his father, Sheikh Ali Cisse, and his legendary grandfather, Sheikh Ibrahim Niasse. He then con­tinued his studies at Al-Azhar University in Egypt, studying Arabic and Usul Al-Din (theology). Upon completing his studies, he travelled exten­sively throughout Africa, the Middle East and Amer­ica attending numerous conferences and participat­ing in religious debates. He also managed to edit and publish several important works, including Sheikh Ibrahim’s Kashif Al-Ilbas.

Posts: In 2001, Sheikh Tijani Cisse was appointed Senegal’s General Commissioner for the Hajj. In 2006, he was again recognised by Senegalese Presi­dent Aboulaye Wade and appointed a Senegalese “Special Missions Ambassador”, a position he holds until the present time. He has also received Senegal’s distinguished award, the Ordre de Merite (1993).

Descendent of The Tijaniyya Founder: The Ti­janiyya is a Sufi order founded by Ahmad Al-Tijani Hasani, an Algerian, in the late 18th century. As the spiritual leader of the Tijaniyya, Cisse is considered to be the bearer of a spiritual inspiration called the Fayda Tijaniyya (“flood” or “overflow of spiritual grace”), giving him authority to carry on the teach­ings of Ahmad Al-Tijani Hasani. Because of this po­sition, some Tijani Muslims refer to Cisse as “the re­viver of the Sunnah”. The Tijanis are characterised by strict following of the sunnah, recitation of spiritual litanies (awrad) individually and in gatherings and an emphasis on developing an inward relationship with God.

“You can only go to Paradise or to Hellfire, and you have to work for Paradise in this life. This is the way, and here, is the place to work for reward in the Hereafter.”

1781 CE is the year the Tijani Tariqa was founded