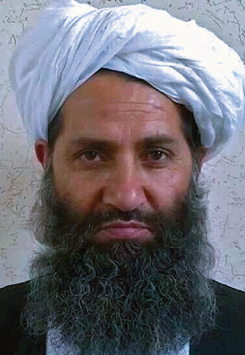 Mullah Haibatullah Akhundzada was named Taliban leader in 2016 after a US drone strike killed the previous leader Mullah Akhtar Mo­hammad Mansour. Akhunzada is known pri­marily as a religious leader who ran schools from which many of the Taliban have graduated.

Influence: Leader of the Taliban

Mullah Haibatullah Akhundzada was named Taliban leader in 2016 after a US drone strike killed the previous leader Mullah Akhtar Mo­hammad Mansour. Akhunzada is known pri­marily as a religious leader who ran schools from which many of the Taliban have graduated.

Mujahideen and Taliban 1.0: Akhundzada is a former member of the Mujahideen, who fought against the Soviet Union invasion during the 1980s. However, during that time, he was known more for his religious guidance rather than military leadership. He continued in the position as a religious counsellor during the formation of the Taliban in the 1990s and, after the Taliban captured the western Farah province, he was put in charge of reducing crime in the area. Later on, he took on the position as head of the mili­tary court, arbitrating disputes among Taliban mem­bers. After the US invasion in 2001, he became both head of the Taliban’s council of religious scholars, and as teacher in a village near the Pakistani border for 15 years until his sudden disappearance in 2016.

Taliban 2.0: After the United States’ withdrawal in 2021 and the Taliban’s subsequent takeover, Akhundzada has become the head of the newly announced Islamic Emirate of Afghanistan. In 2022, he has vetoed a plan for girls in grades 7 to 12 to return to school, ordered a ban on foreign broadcasts from inside Afghanistan, instructed the government to enforce gender segregation of public parks, prevented women from boarding aircraft if unaccompanied by a male chaperone, and barred male civil servants from going to work if they are not wearing a turban or sporting a full beard. He has published a decree requiring all women in Afghanistan to cover their entire bodies except for their eyes when in public, with the burqa being the recommended covering; and in addition he has issued a decree banning criticism or dissension against the Islamic Emirate.