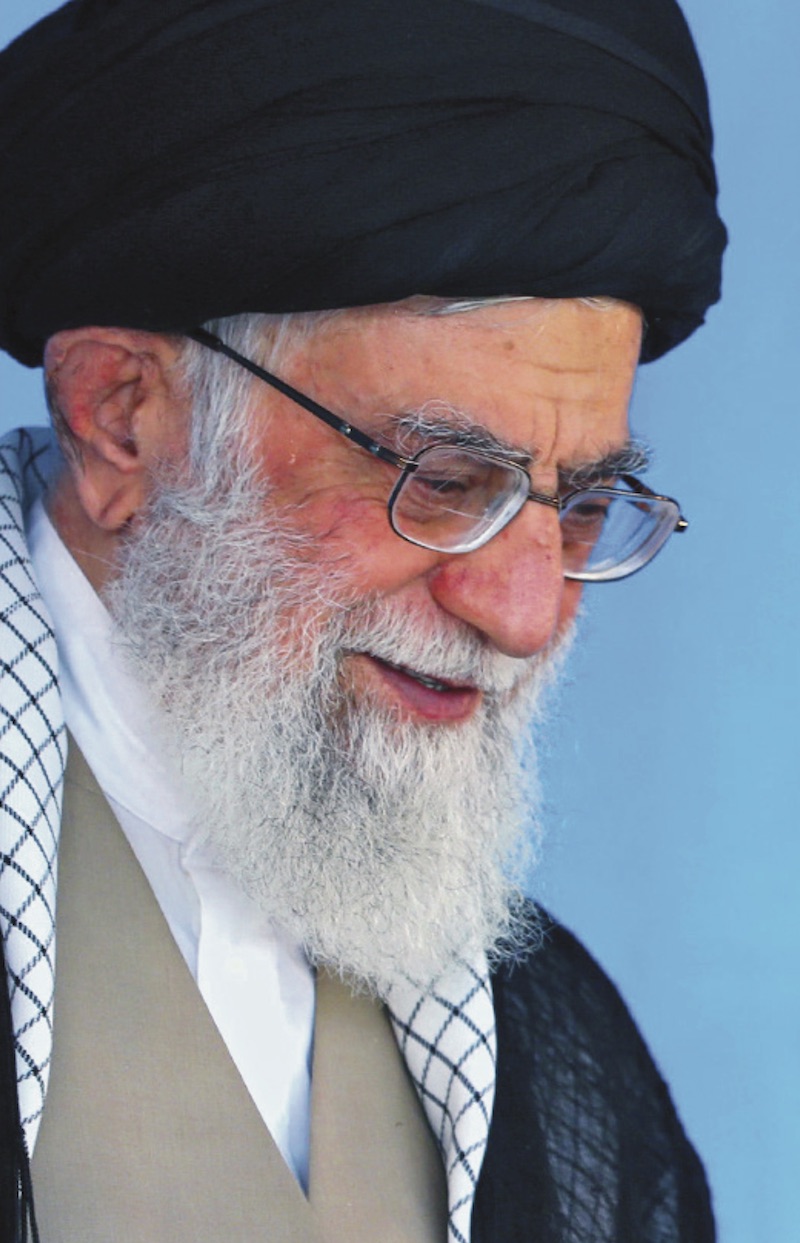 Grand Ayatollah Khamenei is the second Supreme Leader of the Islamic Republic of Iran.

Grand Ayatollah Khamenei is the second Supreme Leader of the Islamic Republic of Iran. He was born in Mashhad and studied in the leading Iranian religious seminary in Qom before becoming involved in the struggle with the Pahlavi Regime in the sixties and seventies. He was a key figure in the revolution in 1979 and served as President between 1981-1989 before succeeding Ayatollah Khomeini as Supreme Leader upon the latter’s death. He has vocally supported most of the unrest in the Arab World, likening it to the Iranian Revolution.

Supreme Leader, Velayat-e Faqih: Khamenei’s current influence stems from his powerful position as a religious leader, which gives him a unique role in political affairs. His job is to enact the Velayat-e Faqih—the guardianship of the jurist. In real terms this means a system where scholars of fiqh (Islamic jurisprudence) have a controlling say in the political affairs of the state. The rule of the jurist was a concept created by Ayatollah Ruhollah Khomeini, based on ideas that have run through Iranian political history since the time of Shah Ismail—who was the first to make Shia Islam the national religion of Iran in the early 16th century under the rule of the Safavids. It was conceived as a way of safeguarding the Iranian nation from tyranny; giving the final say in all matters to a group of religious scholars, the Council of Guardians. This Council is headed by a chief arbitrator—the Supreme Leader.
Leader of Shia Revolution: Khamenei gains much of his influence in Iran from his role as a leader of the Islamic Revolution in Iran. The Islamic Republic of Iran was forged out of the 1979 Revolution. Combating what many saw as the tyrannical rule of the Shah, Khamenei joined the Society of Combatant Clergy that staged demonstrations mobilising many of the protests leading to the Shah’s overthrow. After the revolution in 1979, Khamenei was one of the founding members of the Islamic Republic Party, and a member of the assembly of experts that was responsible for drafting Iran’s new constitution.

Sunni-Shia Reconciliation: On 2 September 2010 Khamenei issued a historic fatwa banning the insult of any symbol that Sunnis hold to be dear, including but not limited to the companions and wives of the Prophet (peace and blessings be upon him). This fatwa was received with great appreciation by the Chancellor of Al-Azhar University, Sheikh Ahmad Al-Tayyeb.
Sanctions: Since 1979, the United States has used sanctions to try to influence Iran’s policies, including Iran’s uranium enrichment program. The sanctions have had a detrimental effect on many aspects of life in the country. In 2015, Iran and the P5+1 (the US, UK, France, China, Russia and Germany) agreed to the Joint Comprehensive Plan of Action (JCPOA), which limited Iran’s nuclear activities and allowed international inspectors in return for the lifting of economic sanctions. This agreement worked for 4 years before President Trump unilaterally withdrew from it and subsequently imposed stricter sanctions on Iran and secondary sanctions for countries still buying Iranian oil. The Biden administration has signalled returning to the JCPOA, but this will require further negotiation with the new President Ibrahim Raisi.

Current Issues: Iran’s role in the Syrian and Yemeni conflicts and how it maintains its relationships with the Arab world are key issues that require Khamenei’s lead. The US assassinated Major General Qasem Soleimani in January 2020 and although Iran replied by firing missiles at a US base in Iraq, this issue seems far from resolved for many.

COVID-19: After initially suggesting the virus was part of a military attack, lockdowns and social distancing measures were introduced and pilgrimages, marches and large religious ceremonies were banned. These restrictions have now been loosened, and combined with low numbers of vaccination have meant a high covid toll.

“Without a doubt, Islam is a demolisher of oppression and arrogance.”