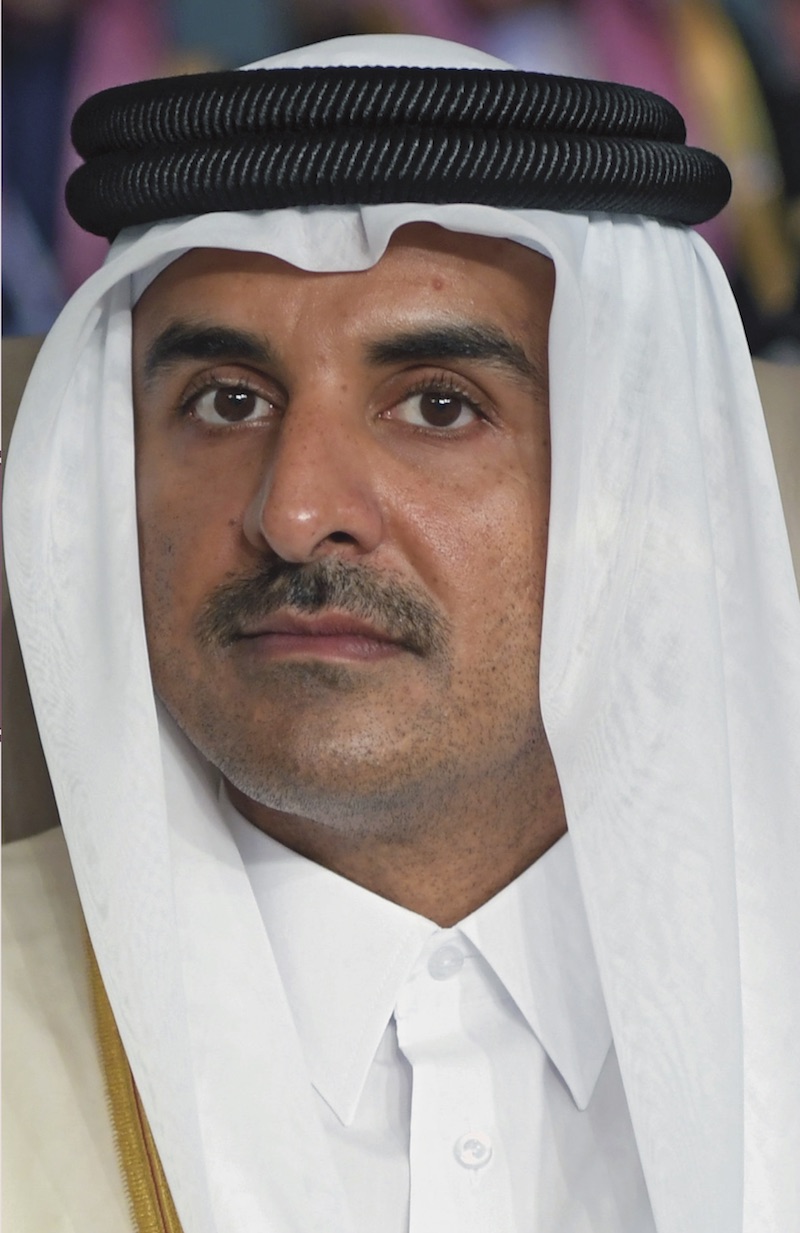 Sheikh Tamim bin Hamad Al-Thani became the Emir of Qatar at the age of 33 after his father, Sheikh Hamad bin Khalifa Al-Thani, abdicated in June 2013.

Influence: Ruler of richest country per capita in the world

Sheikh Tamim bin Hamad Al-Thani became the Emir of Qatar at the age of 33 after his father, Sheikh Hamad bin Khalifa Al-Thani, abdicated in June 2013. Qatar is the richest country in the world with a GDP per capita of $63,505. It has under 400,000 citizens whilst the rest of its population of 3 mil­lion are expatriate workers. It is the top exporter of liquefied natural gas and the site of the third largest natural gas reserves in the world.

Family: Sheikh Tamim is Sheikh Hamad’s fourth son and was chosen as Crown Prince in August 2003. His mother is the powerful Sheikha Moza, who still plays a prominent public role as an advocate for social and educational causes.

Education: Sheikh Tamim completed his studies at a private school in the UK before going on to graduate at the Royal Military Academy in Sandhurst (in 1998). During his time as Crown Prince (2003-13), Sheikh Tamim had exposure to a wide range of posts includ­ing security (he was deputy commander of the armed forces), economics (chairman of the Qatar Invest­ment Authority) and sports. He supervised Qatar’s successful bid to host the 2022 FIFA World Cup.

Expectations: Qatar exploded onto the world scene under his father’s reign, and expectations are that Sheikh Tamim will try to consolidate these achieve­ments. Packing a punch far above its weight has led to neighbouring countries questioning the purpose of so many initiatives. He has had to repair relations with other Gulf countries over supporting the Mus­lim Brotherhood and defend Qatar’s world image over the treatment of labourers in Qatar.

Blockade: In June 2017, Saudi Arabia, the United Arab Emirates, Bahrain, and Egypt, with the back­ing of the Trump administration, cut all relations with Qatar and imposed trade and travel bans. This drastic action resulted from various claims that Qa­tar was supporting terrorism and had violated a 2014 agreement with GCC countries. Its good relations with Iran and its hosting Al-Jazeera TV network were also factors in this tense situation which saw food­stuff imported from Iran and Turkish soldiers called in to help safeguard Qatar assets. A further compli­cating factor in this family feud was that Qatar hosts the largest American base in the Middle East and all the blockade partners are close allies of the US. The 43-month blockade was finally lifted in January 2021, having made little impact.

Peace Broker: With the Emir enjoying good inter­national relations and continuing foreign investment, Qatar has positioned itself into the role of regional peace broker. Qatar hosted the historic signing of a peace deal between the US and the Taliban in 2020 which led to the full withdrawal of US troops from Afghanistan. During the Fourth High-Level Strategic Dialogue between the State of Qatar and the United Nations Office of Counter-Terrorism (UNOCT) in 2022, the State of Qatar was noted as the second largest contributor to the United Nations Trust Fund for Counter-Terrorism out of a total 35 other donors. It has adopted a strong position of proactive engagement through dialogue with regional neighbours.

Investor: Qatar continues to increase its influence through major investments globally. The Qatar Investment Authority has over $450bn in assets ensuring it is a major player in global finance.

FIFA World Cup 2022: The 2022 FIFA World Cup is scheduled to take place in Qatar from 21 Novem­ber to 18 December 2022. This will be the first World Cup held in the Arab world and it is estimated that Qatar is spending more than $200bn in con­struction projects to prepare itself; 12 stadiums, a new port, transportation systems and accommoda­tion for an estimated 400,000 fans will face the scru­tiny of the entire world. The Qatari government has already responded to global criticisms by adopting new labour reforms to improve working conditions. This has included a minimum wage and the removal of the kafala system.

“…We will not tolerate financial and administrative corruption, abuse of public positions for ulterior motives, or abandoning professional standards for the sake of personal interest.”