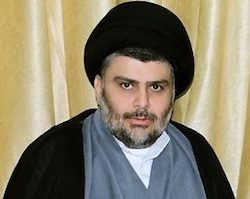 The son of the late Grand Ayatollah Mohammad Sadiq Al-Sadr, and son-in-law of Grand Ayatollah Muhammad Baqir Al-Sadr, Muqtada is a highly influential leader who inherited control over large social institutions that served millions in the slums of Baghdad.

Serving the Poor: He has concentrated on serving Iraq’s poor Shia Muslims and has had complete freedom to work in many parts of Iraq, especially Sadr City, a district in Baghdad named after his father. He provides healthcare and access to food and clean water. He has raised issues of corruption, high unemployment and poor government services.

Politics: He gained prominence after the US invasion of Iraq by creating the Mahdi Army, an armed insurgency movement that formed its own courts and system of law enforcement. This is now known as Saraya Al-Salam. Through it he has concentrated on campaigning against corruption in Iraq, criticising the government openly about this. He has worked for Shia-Sunni unity, and in 2017 called for Syrian president Bashar Al-Assad to step down and met with Saudi Crown Prince Mohammad bin Salman.

King-Maker: In the May 2018 elections, Al-Sadr allied with the communist party, and their Sairoon coalition won the most seats, making him the king-maker in Iraq’s new government. The campaign rhetoric focused on corruption and tried to cut across sectarian platforms. Rejecting influence from both USA and Iran, he has focused on bringing disparate Iraqi parties together. He has continued his criticism of corruption within the Iraqi government.