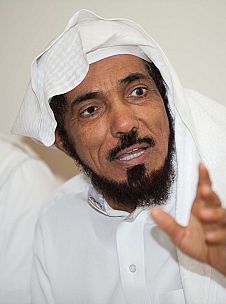 A leading Saudi sheikh, Salman Al-Ouda is a former hard-line cleric turned advocate of peaceful coexistence. He became hugely influential due to his innovative reach in the Muslim world propagated via IslamToday. net and his persistent efforts at ministering to the needs of the global Muslim community. In September 2017, Al-Ouda was arrested by Saudi authorities along with twenty other Saudi clerics for tweets that were seen as offensive to the State. He is still imprisoned (including months of solitary confinement) and awaiting trial.

Key Scholar of Salafi Network: Sheikh Salman Al-Ouda is a leading scholar of the Salafi movement having notable influence in the movement due to his use of multiple modes of education (the Internet, audiovisual media, and print) to educate the large body of Salafi Muslims in the Islamic sciences. Sheikh Al-Ouda’s website brings together a diverse range of Islamic scholars and educators to provide guidance in Islamic thought. He was imprisoned between 1994-1999 for calling for reforms within the country but softened his stance upon release. He is identified with the Sahwa movement, calling for peaceful political reform, more role for the clergy in politics and an opposition to western troops based in the peninsula. His hugely influential website, IslamToday. net—a Saudi-funded website dedicated to providing Islamic educational resources in English, Arabic, French and Chinese, seems to have been shut down. He was active on social media until his arrest and still has 22 million followers.

Ambassador of Non-violence: In an effort to distance himself from alleged connections to perpetrators of terrorism, Al-Ouda is outspoken about the importance of inculcating love and mercy as opposed to violence (except in valid cases of self-defence) in the daily lives of Muslims. As a prominent member of the International Union for Muslim Scholars, he led the delegation in talks with Arab heads of state regarding the need for them to unite in opposition to Israel’s siege of Gaza in early 2009. He has strongly condemned DA’ISH. He also called for peace and unity between members of the GCC and Qatar.

Arrested on Charges Against the State: Al-Ouda was arrested in September 2017 and charged for what ostensibly seems to be nothing more than tweets urging Saudi and Qatar to end a diplomatic rift. He had earlier voiced concerns about Saudi’s human rights record, but perhaps his true crime has been not to publicly endorse and support the recent changes happening in Saudi Arabia. Al-Ouda has been held in punishing conditions, often in solitary confinement and detained incommunicado.
Unjust Arrest: With the public prosecutor calling for the maximum penalty to be implemented, there have been serious fears that Al-Ouda could be executed at any time. There has been outcry from a whole range of organisations about what is seen as a grossly unjust imprisonment, trial and possible sentence. The International Union of Muslim Scholars, the European Muslim Forum and Amnesty International have all called on the Saudi government to hold a fair trial or release Al-Ouda and his two compatriots; Sheikh Ali al-Omari and Sheikh Awad al-Qarni.

“The greeting of peace – as-salamu ‘alaykum – has many meanings. One of these meanings is that the person you are greeting will be safe from you -from your tongue, your heart, and your hand- and that you will not transgress against that person with your words or your deeds. This greeting is also a prayer for peace, safety, mercy and blessings. We should take those noble meanings, which we so often say with our tongues, and make them our way of life in our dealings with other people.”

“You cannot call yourself patient until you are willing and able to bear things that you have no wish to bear.”