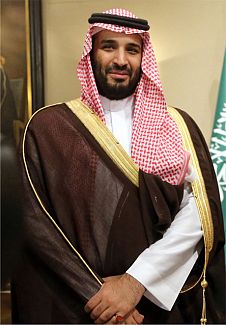 HRH Crown Prince Muhammad bin Salman Al-Saud is the Crown Prince of Saudi Arabia, First Deputy Prime Minister and Minister of Defence, all at the tender age of 36.

Rapid Appointments: At the beginning of 2015, Prince Mohammed bin Salman was largely unknown in political and diplomatic circles. Since his father’s accession to the throne in January 2015, Prince Mohammed has been swiftly appointed to a number of powerful positions. He was first appointed Minister of Defence, and also named Secretary General of the Royal Court. Then Prince Mohammed was named the chair of the Council for Economic and Develop­ment Affairs and was given control over Saudi Ara­mco by royal decree. In June 2017, he was appoint­ed as Crown Prince of the Kingdom following his father’s decision to remove Prince Mohammed bin Nayef from all positions. In 2022, he was appointed Prime Minister, a post traditionally held by the King.

Military Challenges: As Minister of Defence the young prince dealt with many key mili­tary issues which Saudi Arabia is still currently involved in. He is perhaps most personally identified with the air campaigns against Houthi strongholds in Yemen. Saudi Arabia is also supporting the monarchy in Bah­rain and arming the anti-Assad forces in Syria. His ascension to the role of Crown Prince coincided with geopolitical tensions among members of the Gulf Cooperation Council and the cutting of diplomatic ties with Qatar, which subsequently turned into a full blockade before being resolved in January 2021.

Catalyst of Change: The Crown Prince has been linked to major changes taking place in the King­dom: allowing women to drive, holding their own passports and moving independently, the (re)open­ing of cinemas and holding of pop concerts, a crack­down on corruption (including the arrest of princes and prominent businessmen), and the proposal to float Saudi Aramco to mention a few.

Vision 2030: As Chairman of the Council of Eco­nomic and Development Affairs, Crown Prince Mohammed bin Salman launched “Vision 2030”, a comprehensive, multi-year plan for the future of Saudi Arabia. The ambitious plan seeks to revitalise the Saudi economy by bolstering the Kingdom as a global investments powerhouse, and moving away from oil-dependency as the largest source of national income. It also seeks to strengthen government effi­ciency and the promotion of a “tolerant, thriving, and stable Saudi Arabia that provides opportunity for all.”

The Khashoggi Assassination: Jamal Ahmad Khashoggi was a prominent journalist and Saudi Arabian dissident who was assassinated at the Sau­di consulate in Istanbul on 2 October 2018. Forced into exile from Saudi Arabia in 2017 because of his criticisms of authoritarian rule and foreign policy, Khashoggi had many enemies in high places. Al­though the Saudi government denied any knowl­edge of the murder, they were later forced to admit that their officials had been involved, but didn’t go as far as the CIA who concluded that Crown Prince Mohammad bin Salman had ordered Khashoggi’s assassination.

“Our Vision is a strong, thriving, and stable Saudi Arabia that provides opportunity for all. Our Vision is a tolerant country with Islam as its constitution and moderation as its method.”