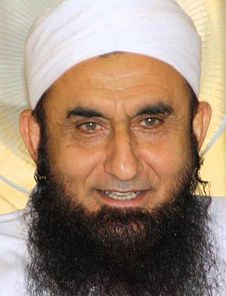 Maulana Tariq Jameel is a prominent Deobandi scholar who is also one of the most popular preachers in Pakistan. He belongs to the Tablighi Jamaat group and his lectures focus on the subject of self-purification, avoidance of violence, observance of Allah’s orders and pursuing the way of Prophet Muhammad (peace be upon him).

Background: After completing pre-medical studies, Maulana Tariq was admitted to the King Edward Medical College in Lahore. It was there—under the influence of members of the Tablighi Jamaat—that his focus changed to Islamic Education. His Islamic training is from Jamia Arabia, where he studied Qur’an, Hadith, Sufism, logic, and Islamic jurisprudence. Maulana Tariq’s background in the sciences allows him to explain Islamic matters in a way that appeals to modern urban Muslims. Additionally, his simple lifestyle and eloquence in Urdu, as well as his fluency in Arabic, catapulted his fame across the Muslim world.

Tablighi Jamaat: Tablighi Jamaat is a political missionary movement founded by Muhammad Ilyas Al-Kandhlawi in India 1927. It focuses on encouraging Muslims not to neglect the basic practices of their faith. It has informal affiliations with the Deobandi movement but targets a more general audience. The sub-continent diaspora have carried its message to nearly every country in the world and its adherents number in the millions. It has annual gatherings in Pakistan and Bangladesh which number in the millions.

Influence: In addition to running a madrasa in Faisalabad, Pakistan, Maulana Tariq has delivered thousands of lectures around the world. He has been very effective in influencing all types of the community ranging from businessmen and landlords to ministers, actors, and sports celebrities.