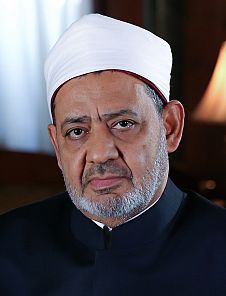 Sheikh Ahmad Muhammad Al-Tayyeb was appointed as Grand Sheikh of Al-Azhar in March 2010, after the passing of his predecessor, Dr Muhammad Sayyid Tantawi.

Sheikh Ahmad Muhammad Al-Tayyeb was appointed as Grand Sheikh of Al-Azhar in March 2010, after the passing of his predecessor, Dr Muhammad Sayyid Tantawi. Al-Tayyeb was formerly the president of Al-Azhar for seven years and prior to that, served for two years as the most powerful cleric in Egypt as its Grand Mufti.

Scholarly Influence: His scholarly influence as a leading intellectual of Sunni Islam spans the globe. He has served as the Dean of the Faculty of Islamic Studies in Aswan, and the theology faculty of the International Islamic University in Pakistan. He has also taught in universities in Saudi Arabia, Qatar, and the United Arab Emirates.

Political Stance: Over the past years of political uncertainty and unrest in Egypt, Al-Tayyeb has attempted to hold the middle way. He has been outspoken against the Muslim Brotherhood for their exploitation of Islam as a political ideology whilst also resisting calls by President Abdel Fattah El-Sisi for a “religious revolution” and efforts to “renew Islamic discourse”. Such efforts included the suggestion to revoke the verbal divorce law in Egypt. Al-Azhar wholly rejected the President’s plan, calling the law an “undisputed practice since the days of the Prophet Muhammad.” Al-Tayyeb has been active in trying to diffuse the influence of DA’ISH, organising many initiatives and conferences. He has also tried to improve foreign relations and met with many foreign religious leaders and heads of states (including the Pope and Queen Elizabeth).

Advocate of Traditional Islam: Sheikh Al-Tayyeb has emphasised his mission to promote traditional Islam since becoming Grand Sheikh. He has stressed the importance of teaching students about Islamic heritage—considering Al-Azhar graduates as ambassadors of Islam to the world. In an age where the claimants to authoritative Islam seem to be on every corner, Sheikh Al-Tayyeb has both the institute and the personal skills to authentically claim to be a representative of traditional Islam, Islam as practiced by the majority of Muslims throughout the ages, Sheikh Al-Tayyeb has defined the Sunni community (Ahl Sunnah wa Jama’a) as those who follow Imam Abul-Hasan Al-Ash’ari and Imam Abu Mansur Al-Maturidi and the scholars of Hanafi, Maliki, and Shafi’i jurisprudence, as well as the moderate scholars of Hanbali school. He also included the Sufis following the way of Imam Al-Junayd.

Leader of Al-Azhar University: Sheikh Al-Tayyeb leads the second-oldest university in the world, where teaching has continued without interruption since 975 CE. Al-Azhar represents the centre of Sunni Islamic jurisprudence. It is a key institution that issues authoritative religious rulings and has provided extensive Islamic education to Egyptian and international students since its inception over a millennium ago. This history makes it a bastion of Sunni traditionalism. The university is considered one of the most prominent Islamic educational institutions and the foremost centre of Sunni Muslim scholarship worldwide.

Administers Al-Azhar Education Network: Al-Azhar is currently the largest university in the world, having risen from a group of three schools in the 1950s to its current state with 72 feeder schools, with close to 300,000 students studying there at any one time. Including schools that are part of Al-Azhar waqf initiatives, there are close to two million students. The graduates of Al-Azhar have great respect as religious leaders within the Muslim community, and this makes the head of Al-Azhar an extraordinarily powerful and influential person.

COVID-19: In April 2020, the Council of Senior Religious Scholars of Al-Azhar issued a fatwa declaring that any public gathering during the pandemic, even for the purpose of worship, constitutes a contravention of the Sharia law, which aims to safeguard the public good. Mosques remained closed for 5 months.
Interfaith Initiative: The International Day of Human Fraternity, is an annual UN-designated celebration of interfaith and multicultural understanding which was established by Pope Francis and Sheikh Al-Tayyeb.

“The unity between Muslims and Coptic Christians of Egypt is something of absolute importance.”

“It is necessary to present Islam the way it is, the way it respects others, the way it believes in others and grants them freedom of religion.”