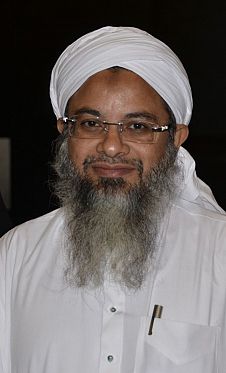 Maulana Mahmood Madani is the President of the Jamiat Ulema-e-Hind (JUH), having been secretary-general for 13 years, and has gained influence for his forthright condemnations of terrorism and unfaltering support of the Indian Muslim community.

Maulana Mahmood Madani is the President of the Jamiat Ulema-e-Hind (JUH), having been secretary-general for 13 years, and has gained influence for his forthright condemnations of terrorism and unfaltering support of the Indian Muslim community.
Lineage: Maulana Mahmood’s grandfather Maulana Syed Hussain Ahmad Madani was a great scholar of Islamic theology, teaching Hadith in Medina, and Deoband. He was the President of the JUH until his death in 1957 and was then succeeded by his son Asad Madani (the father of Maulana Mahmood), who was President until his death in 2006.

Jamiat Ulema-e-Hind (JUH): JUH was established in 1919 by leading Deoband scholars who argued for the concept of composite nationalism, believing that a nation should not be formed on the basis of one factor only (e. g. religion, ethnicity etc), but rather be based on many factors. Maulana Mahmood has striven to keep this concept alive amid all the turmoil of nationalistic politics in India. After graduating from Deoband in 1992, he became actively involved in the JUH, organising conferences and meetings across the country which saw a rapid rise in membership. He became the General Secretary of JUH in 2001, and continued to invigorate the organisation. When his father passed away in 2006, a dispute arose between him and his uncle around the leadership of the organisation leading to a bifurcation.

Activism: He has striven for Muslim rights in India and been outspoken in his opposition to the misuse of the term jihad as a tool of terrorism in India. Following fatal bomb blasts in 2008, he mobilised Darul Uloom Deoband institutions to host events condemning terrorism as inherently un-Islamic. This had a major impact in the community. He has been at the forefront of relief work (earthquakes in Gujrat and Kashmir), health and social development (Kashmir).